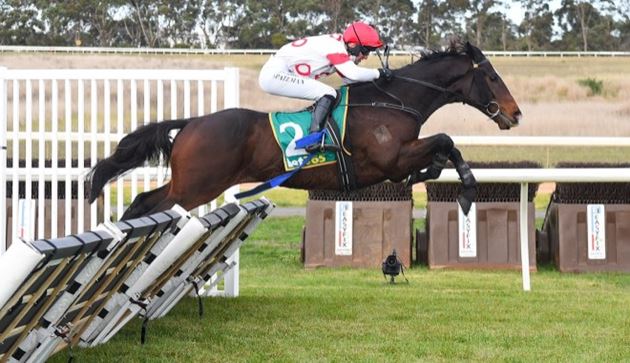 Hyland had dabbled with jumpers through the 2000s and experienced his most successful year in 2008 when Weeping Willow won the Galleywood Hurdle (3000m) and 2004 Queensland Derby winner Toulouse Lautrec claimed the Australian Steeplechase (3900m) at Sandown, the Trevor Clarke Steeplechase (3400m) at Flemington and Great Southern Steeplechase (3300m) at Mornington.

The Cranbourne-based trainer had no representation over jumps in recent years until Annunciate was runner-up in a maiden hurdle during last month’s Warrnambool May Racing Carnival.

At the second time of asking over hurdles, Annunciate provided Hyland with his first jumping victory since King Triton, in partnership with father Pat, won the J.E.H. Spencer Memorial Steeplechase (3500m) at Pakenham in July 2016.

Stablemate Karakoram almost made a successful hurdling debut later on the nine-race card at Hamilton, finishing second after being caught inside the final 100 metres by Bakery Hill, who prevailed by half a length.
“He did a really good job and he’s got the makings of a nice jumper,” Hyland said of Annunciate.

“He’s had a long prep on the flat and I just want to keep him to short jumping races for the moment and probably when he puts in an average one he can go out for a little break and I think he’ll be a better horse for it next time.

“He’s not a real strong stayer but I think that will come with a lot of hard racing.”

Steven Pateman positioned Annunciate fourth, one off the fence, and the even-money favourite was poised to strike approaching the home turn before clearing the final two obstacles without fuss and winning by 3.25 lengths.

“He was quite impressive, he jumped well,” Pateman said. “He wanted to be here and he’s had a long prep, so that’s a good sign.

“I had to make a move a bit earlier than I wanted to so he was there to be beaten but he was too good.”

Annunciate was racing for the 14th occasion this season, with his breakthrough hurdle win his first in the period which includes five placings on the flat between 1600 and 2580 metres. The six-year-old All Too Hard gelding has raced 57 times for six wins, 20 placings and $221,149 in prizemoney.