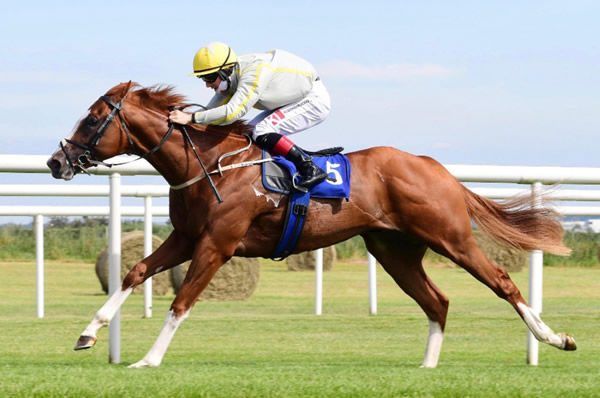 Last week saw the passing of champion European broodmare Cassandra Go at age 25 and overnight she was back in the news when her two year-old colt by Churchill (IRE) became her tenth winner.

Trained by Ger Lyons and ridden by Colin Keane, Once Upon a River was third on debut earlier this month and gave nothing else a chance when bolting clear to win the 7 ½ f maiden at Roscommon by four lengths.

He was a short priced favourite and ran away from Canters Well (Caravaggio) and Minister of War (Churchill).

“Upon a River has been very well at home and this opportunity presented itself. We won’t be in any rush with him now, he is a horse for next year,” said Shane Lyons, assistant trainer.

Retained to race by his breeder Trevor Stewart, Upon a River is a half-brother to triple Group I winner Halfway to Heaven, the dam of two champion mares, both by Churchill’s sire Galileo, in Magical and Rhododendren.

Cassandra Go is also the dam of Group III winners Tickled Pink and Theann, the dam of another dual Group I winner for Galileo in Photo Call.

Once Upon a River is her second last foal, born when she was 23!

Her third last foal is three year-old Gleneagles filly Holly Golightly, who is also trained by Ger Lyons and broke her maiden last month. She holds entries for several upcoming stakes races so the record of Cassandra Go may well improve even further.

The final foal from Cassandra Go is a yearling colt by Saxon Warrior.

Upon a River is the fifth winner for Churchill, who returns to Coolmore Australia this spring at a fee of $22,000.