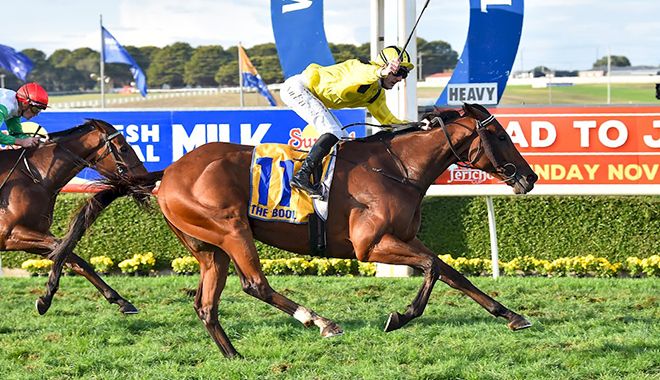 Witchachar Star joined Hyland this season as a two-time winner in South Australia. His first campaign for the Cranbourne-based trainer has seen him win five of seven starts, progressing from two 0-58 handicap victories at the provincials to winning one of Victoria’s premier country cups.

“He just kept improving,” Hyland said. “We aimed very low just to get his confidence up, he’s exceeded our expectations obviously.”

Witchachar Star raced in the Warrnambool Cup on the quick turnaround, having led throughout over 2400 metres at Sandown Hillside last Saturday.

Winning jockey Beau Mertens has partnered Witchachar Star to four of his Victorian wins for Hyland and suggested he had few concerns in the run.

“I had a lot of confidence in him (Chris Hyland) that he’d keep the horse right from Saturday to now and what a terrific job he has done,” Mertens said.

“Every time I ride this horse it seems like I nearly go too early on him, he just takes you into the race so good.

“I knew I had Grandslam covered, so I was just being conscious I didn’t get past too soon, but he just took me straight into the race and wow, what a nice horse.”

Mertens joined his two-time Warrnambool Cup-winning father Peter on the honour roll with his first May Racing Carnival winner and only ride during this year’s three-day event.

“He (Peter Mertens) would be very proud. He actually told me a few weeks ago before he started his winning streak that he’d be a good Warrnambool Cup horse, so it made me inclined to do the 54kg (when third to Point Nepean at Caulfield two starts ago) before he came down here,” Mertens said